I started working on this model of the British battleship HMS King George V way back in 2004. To be fair, I considered it finished, excluding textures, sometime in 2006. However, I never quite did get around to making those textures! A mere nine years later, in October 2015, I decided to try and finish it. Nine years is a long time. Computers are more powerful, and my skills have improved. I could not simply ‘finish’ the model, as originally planned. Instead, I decided to revamp it, to bring it up to my current standards and improve accuracy wherever I could. This is no small undertaking, and I place no timescale on it – it’ll take as long as it takes. No doubt other projects will come and go before I finish this one.

Ships, particularly battleships, and especially by the Second World War, are very complex machines. King George V was the first ship in her class, but there were four others. Prince of Wales is probably the most famous of them all, partly for her involvement in the Battle of the Denmark Strait, where Bismarck and Prinz Eugen blew up and sunk HMS Hood, but mainly for her sinking in the South China Sea later that same year, after air attack by Japanese forces. I’m considering carrying out the necessary modifications as I go in order to represent at least the first three ships – KGV, PoW and Duke of York, at various points in their careers. We’ll see how that goes!

This project of course has a lengthy entry on the old site, which you can see here. I’m only reposting work from 2015 onwards here. This is a long post, as I am recapping my work on this to-date since 2015.

The secondary turrets seemed like as good a place to start as any. My original version, as is the case throughout the ship, had some accuracy issues due to a lack of decent reference photos at the time. At some point in the last 10 years or so, the Imperial War Museum has posted up a phenomenal array of photos of all the ships of the KGV class – this is going to be an invaluable resource. 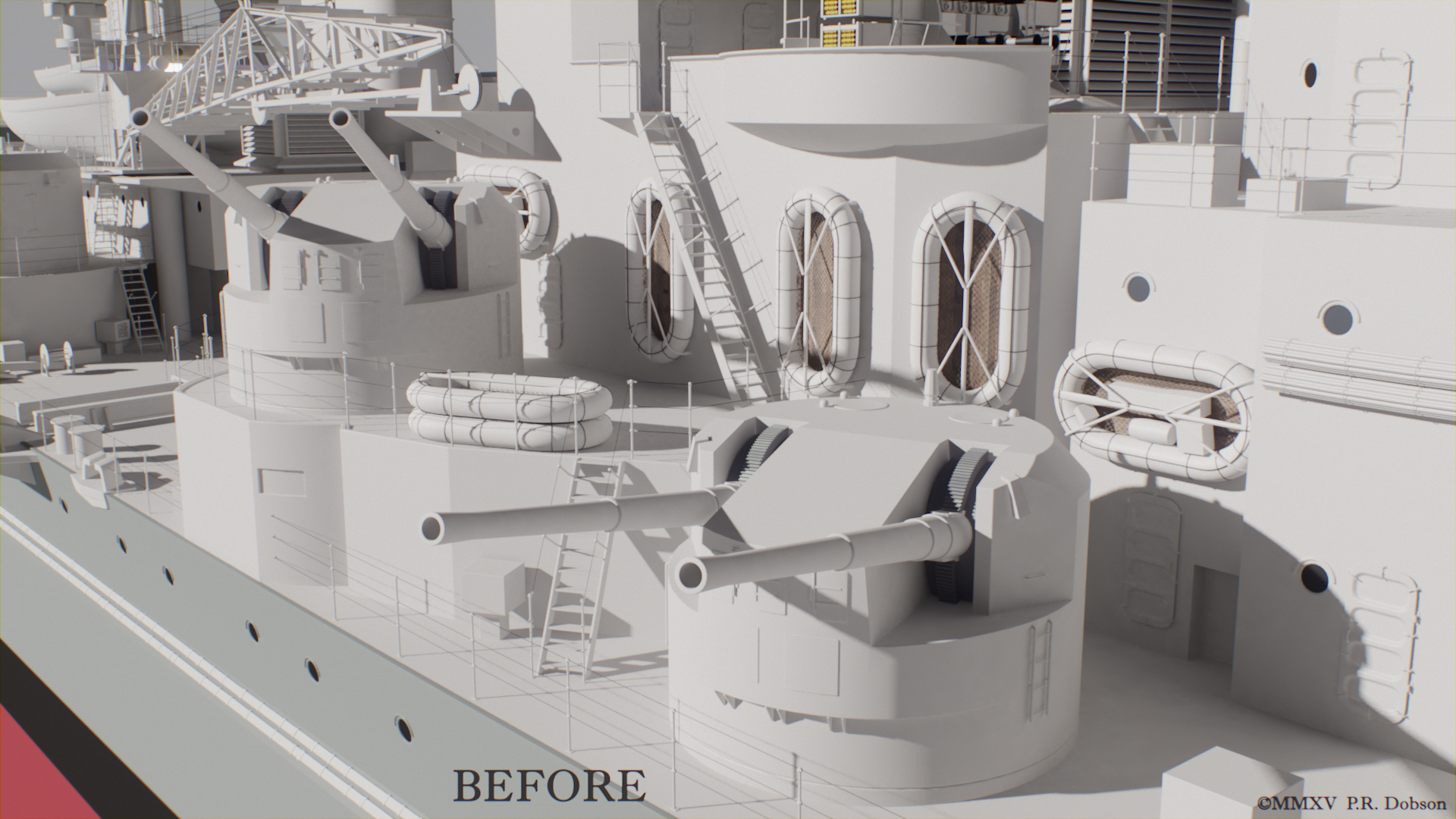 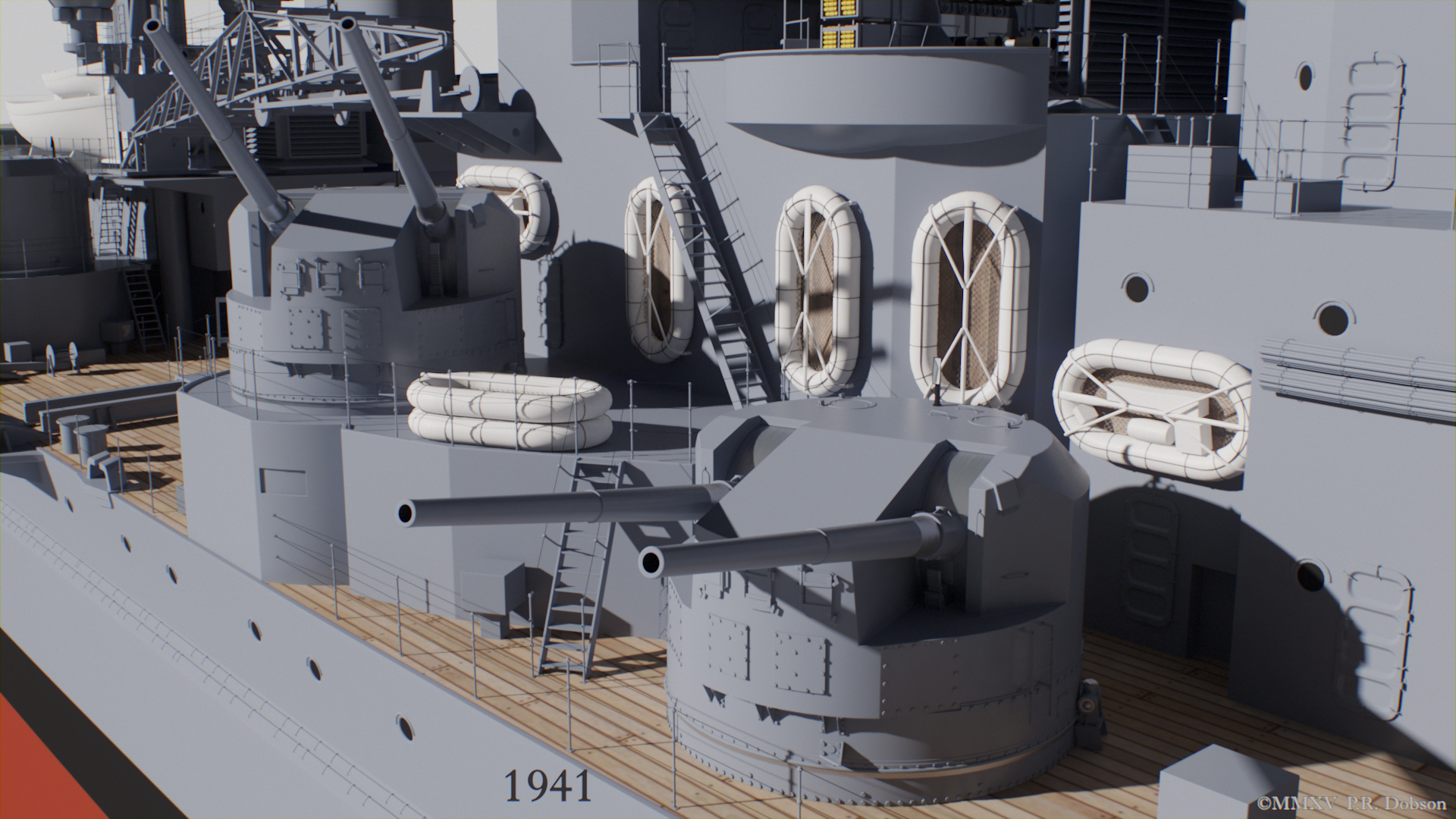 My goal at this stage was to retain as much of the original as I could. Improvements would be made to existing objects where possible, and outright replacement where necessary. There are a few completely new details that I couldn’t see originally, like the rotation limit buffers.

Yes, I have modelled the bolt heads. This should get interesting.

I managed to work out the correct positions of portholes for King George V, Prince of Wales and Duke of York. Using some early backups, I was able to restore the upper areas of the hull to remove all the old portholes. I then recut the new ones in their correct positions. Also at this time, I altered the profile of the bow somewhat, since that was not quite accurate either. With all that done, I rebuilt the degaussing cable. This feature was only present on King George V, and then only prior to some time in 1943.

The stern deadlights on the original model – another feature found only on King George V – were rather simple rectangles. Better photos revealed that in reality, they had covers that were hung on hinges, allowing them to be closed (hence deadlights!). It also became apparent that the propellers were not quite the correct shape, and they were also mounted the wrong way around, so these were corrected as well. 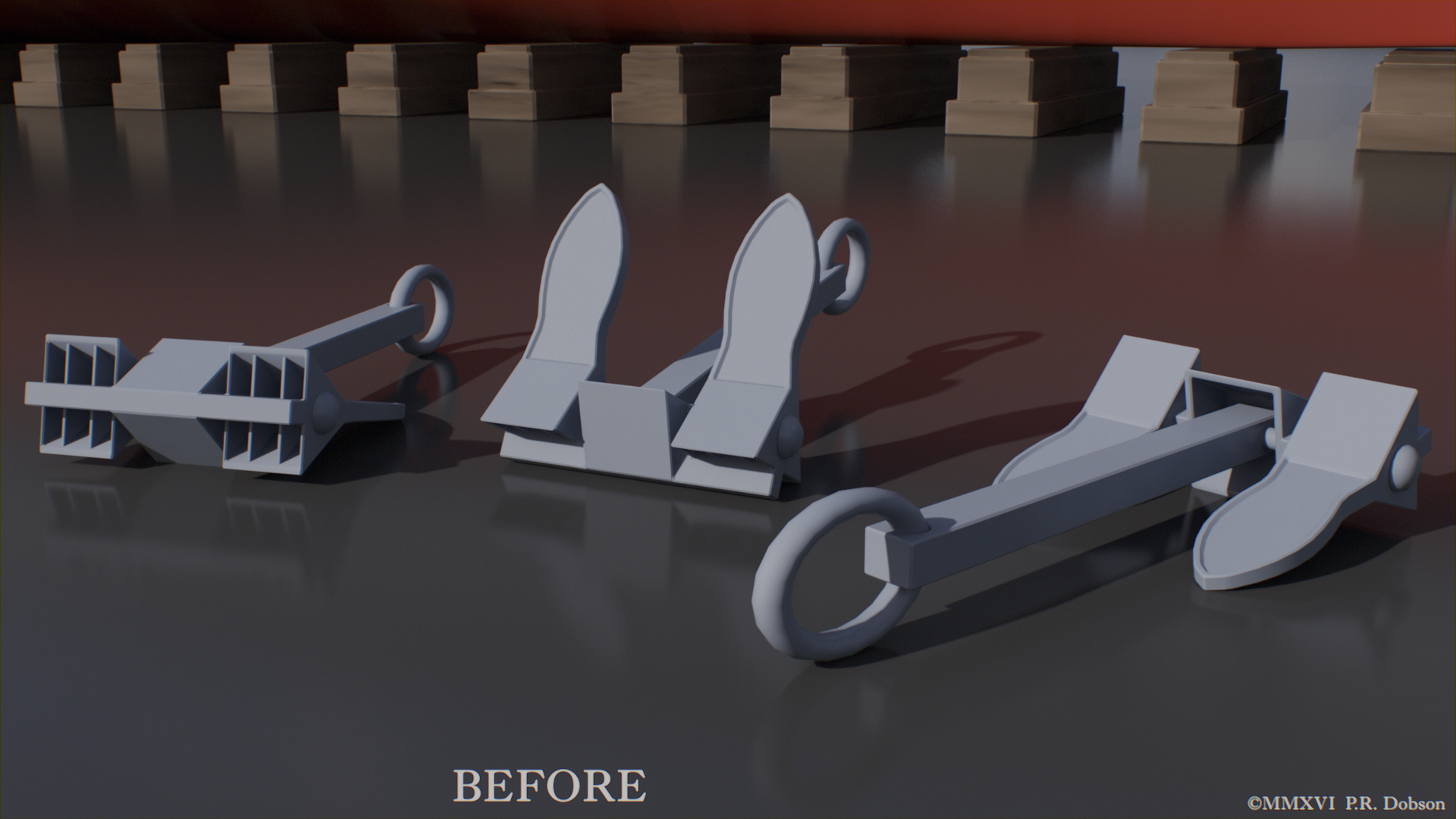 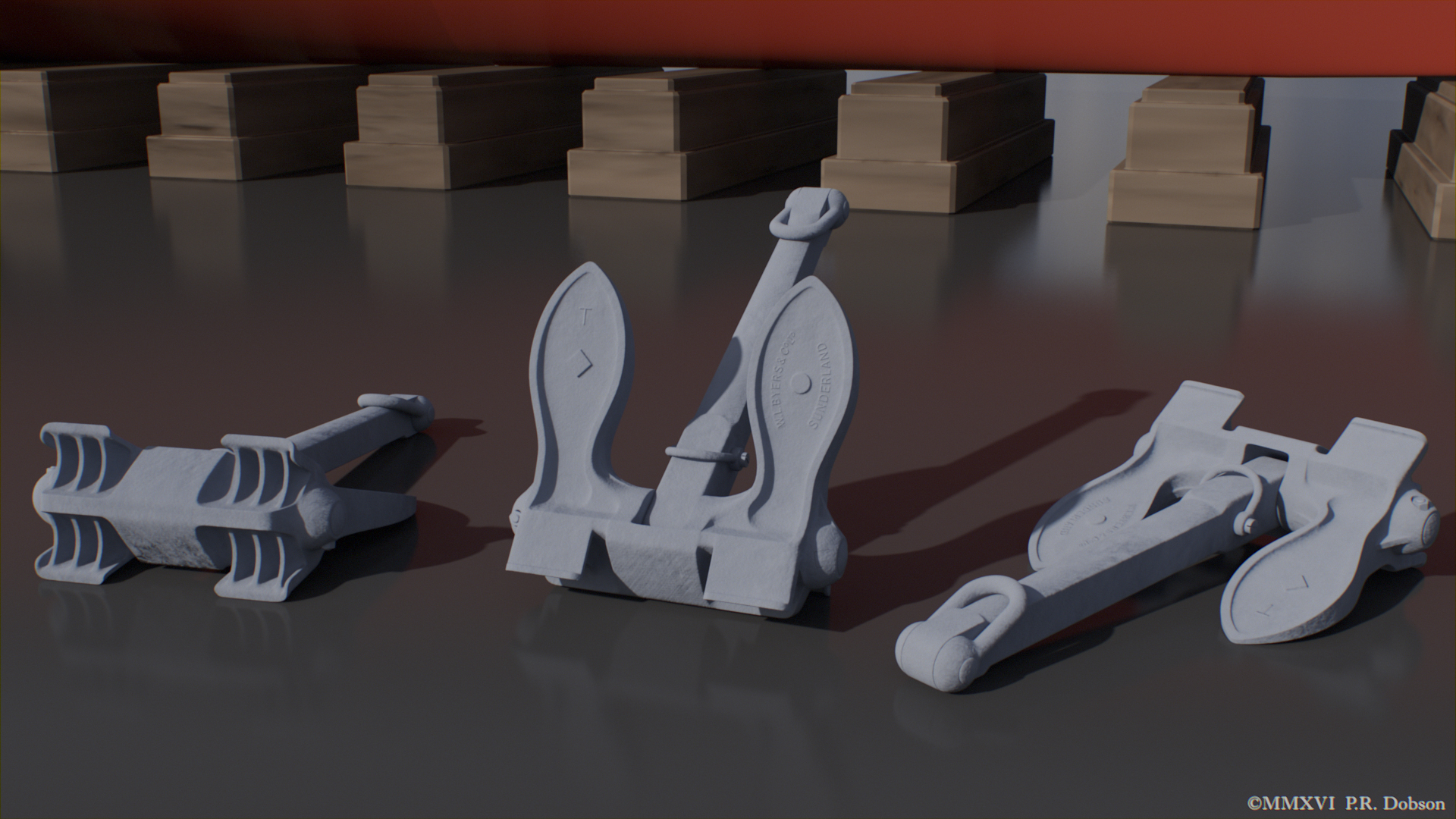 The anchors on the original model were, to put it simply, abysmal. As was much of the handling gear up on deck. Pretty much everything to do with anchors was bad – even the hawseholes! I threw away my originals and built a proper Byers anchor as a replacement.

The forecastle proved to be the hardest area yet finding good references for. The detail I needed to see was always just out of frame! Eventually, I established as best I could what all the various details were – the cruiser HMS Belfast proved useful in a couple of places. This area of the ship is 100% new. Even the hull in this area is new. The small projections just aft of the hawsehole openings are the only features I was still not able to get a clear image of. I believe they were used when streaming paravanes, or possibly in their recovery.

Literally everything forward of the fore sea break was wrong on my original model. There are likely still to be some minor errors with my replacement parts, but I’m quite happy with it now.

Another area of the ship that I had very poor references for first time around is the catapult. These ships carried Supermarine Walrus Mk.I amphibious reconnaissance aircraft, and were launched from an athwart-ship catapult amidships. My original version is not even straight! Instead, it follows the deck camber; that’s not how it’s meant to be. There is also a lot of missing detail, so this again is another area where I simply deleted everything and started again.

There are now a lot of photos covering this area. They have enabled me to work out how the majority of it should look. A couple of areas were still a little hazy, though. Mainly these are the inside of the catapult trolley, the lower part of the pneumatic buffers towards each end of the track, the insides of the turntables and also the devices that sit between the fore-and-aft rails either side of the turntables. I assume those to be some kind of clamping mechanism to hold the turntable in position during launch.

As you can hopefully see from the second image, there is a significant amount of extra detail on the new version. Apologies for the dark image, I have been playing around with colours and lighting and the result on this occasion was not quite what I intended.

There are still a few more details to add into this area, but I will leave those until I start work on the surrounding superstructure.

Finally, I did a lot of work on normal maps for the hull, to add in the plating effect that can be seen in tighter photos. These details are usually extremely hard to make out in photos, due to the usual poor quality or low resolution. After a lot of careful studying, I did arrive at something that seems to match up with the photos available. That includes the underwater hull (bow and stern, anyway). These ships had fully riveted hulls, and so I included the rivets in the map. They are therefore rather large! The rivets are just slightly too subtle at the moment, so they’ll be tweaked before the next update. Otherwise, that’s it for now!

Future posts on this project will be somewhat shorter!