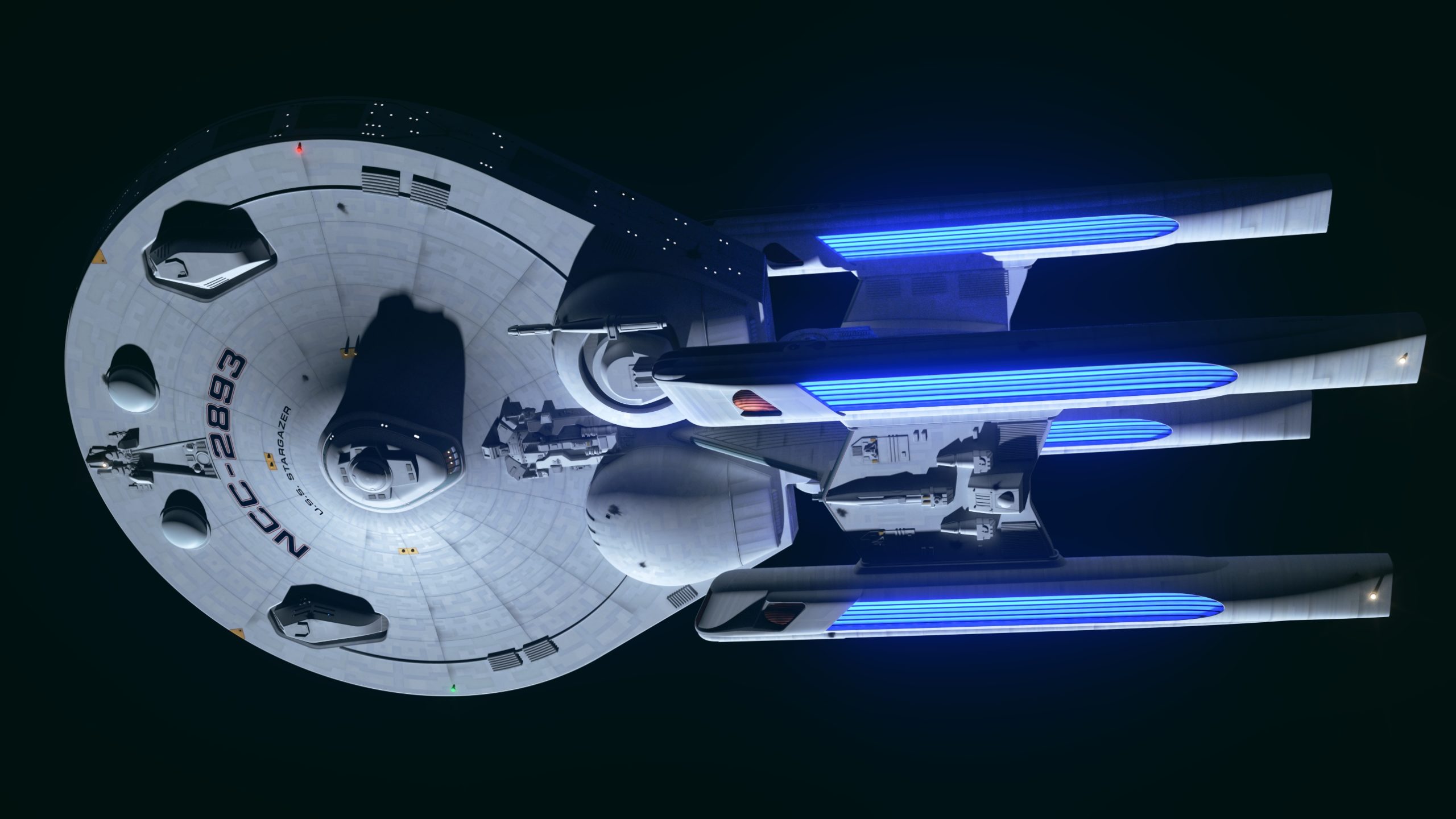 Having started this one back in 2011 (take a look back at Part 1), I’ve taken advantage of the increase in spare time that 2020 has so graciously given me to get all the materials and maps on my Constellation-class starship sorted out. I’m calling her finished now… but you never know! There’s still some more interior work that I could do on her in the future.

I produced marking sets for the USS Stargazer, USS Hathaway, USS Valkyrie, and the USS Constellation. Scorches and other weathering effects can be easily adjusted in the material to suit the requirements of the scene.

The original Constellation-class model was of course a set-dressing in Picard’s ready room on the Enterprise-D (Star Trek: The Next Generation). We see this ship for the first time in the Season 1 episode ‘The Battle’, as Picard’s former ship, the USS Stargazer. The original dialogue had the ship as a Constitution-class, like the original Enterprise. One assumes refitted, à la the ship from the movies. As-filmed, the characters refer to the ship as being Constitution-class. Afterwards, the producers decided to use a different ship design, selecting the model in Picard’s office. ‘Constellation’ was chosen as a replacement, since it is close enough that it could be dubbed over the top without viewers noticing.

The ship is very clearly a kitbash design of the refit Constitution-class. But unlike many other kitbash ships we see through the various series, the Constellation-class had some thought put into it. These ships are big. There’s quite a lot more internal volume than you get with the refit Constitutions Captain Kirk was flying around in. There are a lot of subtle differences as well.

Differences from the Constitution-class

Take the warp nacelles, for instance. They appear to be just the Constitution nacelles with the rear end squared off. But look closer, and you will see that the design of the front is different. The main body is essentially made from two Constitution inner-halves. Because of these differences, I decided that these engines are only superficially like the older class’. They are most likely of a newer type – and probably glowed dangerously, TNG-style, from day one.

Many people add in the torpedo launcher details from the Constitution-class when they tackle this ship. As far as I’m concerned, it was clearly a deliberate design decision to cover that area over on this ship. There are launcher-like structures above/below the old torpedo bulges that I take to be a new, more advanced launch system. Perhaps they are an early version of the type on the Galaxy-class. And there are numerous other small differences scattered all over, wherever there are parts in common.

When I was creating the hull maps for this ship, I aimed to keep them pretty close to how the studio model was painted. I tidied up the bottom of the saucer a little compared with the original. I also made a number of small changes to the configuration of a few things, such as windows. These I adjusted a little to suit a workable internal deck layout. I also modified the shuttlebay positions very slightly to conform to this.

Aside from a relatively rudimentary interior set for the lounge just aft of the bridge (and a deck down), and a similar space at the bottom of the saucer (which I made a conference room), I have done no further interior work since the corridors in Part 1. There is a roughed out concept for the main shuttlebay, which I may yet return to at some point in the future and flesh out more.

So that’s it, really. Modelling, as always, was in Cinema 4D, and rendered using Redshift.

You can also view this on my ArtStation profile.