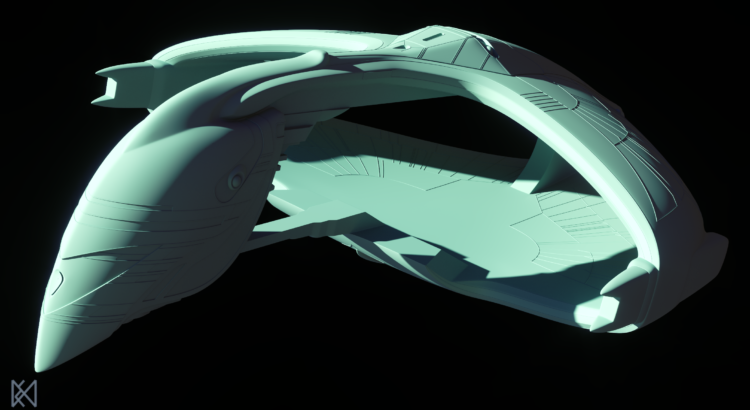 The Romulan Warbird has been on my list of scifi ships to model for a very long time. The various plans for the ship available online are all terrible. When I last looked at doing it there weren’t that many decent reference photos of the studio model either. Lots of photos have been posted up online since then for both of the shooting miniatures (see Ex Astris Scientia for details on the differences between the models), thanks to various auctions etc.

In the absence of trustworthy plans, the only starting point was the photos. Unfortunately, there are no where near enough to be able to use modern photogrammetry solutions. I was able to use a much older program to at least lay down the relative proportions, though. From there it was necessary to perform some manual camera matching inside Cinema 4D. There was no way I was ever going to get it 100% accurate, but eventually I was happy with my rough block-in model.

And so finally, in December 2020, I started work on the final Romulan Warbird model. I have largely followed the second, more detailed shooting miniature as reference, with reference to the first in some areas. The aim was to make mine a blend of the two. I have not made any reference to the CG model created for DS9.

Rather than starting a completely fresh model, I chose to simply start refining and improving on the very rough block-in model. This allowed me to concentrate on establishing the required silhouette before I worried overly about internal geometry and polygon flow. The ship began life as a collection of separate bodies. One body for the ‘head’ of the ship, one for the twin wing main body, a nacelle, the lower and upper booms, and finally the top ‘hump’.

To help verify the basic hull shape was right, I made a quick turntable animation. I was mainly looking for any issues with the wing surfaces (lumps and bumps, basically).

As the refining process continued, I gradually merged and integrated the separate bodies into a single body for subdividing. This was the best way to achieve a final result as close as possible to the original shooting miniatures, where they clearly used a fair amount of filler to blend the various components! Eventually I reached the point where I decided that the basic hull was complete, and ready for detailing.

The first area to tackle was the hump on the top of the ship. I created a new piece and blended it into the original hull to get the correct appearance, and then added the various cutouts and lines. The two balls in cones in the top cutout I have reused at the aft ends of the wings. I think I will need to scale these down slightly later on for those positions.

Mixed in with other work, I detailed up the head of the ship with all its different cutouts and lines, and of course the deflector dish right on the front. I also added or refined the two sets of boxes behind the head, and under the ‘beak’ at this stage. These remain separate objects for now, but will probably be merged with the hull eventually.

The main detail work at this stage as of course the feather grids on the four wing surfaces. I laid these out carefully in advance with splines, and then gradually worked my way through cutting them into the hull, cleaning up and extruding. There are other ways I could have approached them, but I felt this gave the best results.

I think that will do for Part 1 of the Romulan Warbird! Next time will be the remainder of the details, and probably materials to wrap it all up.

You can also follow this project via my thread for it at SciFi-Meshes.com.