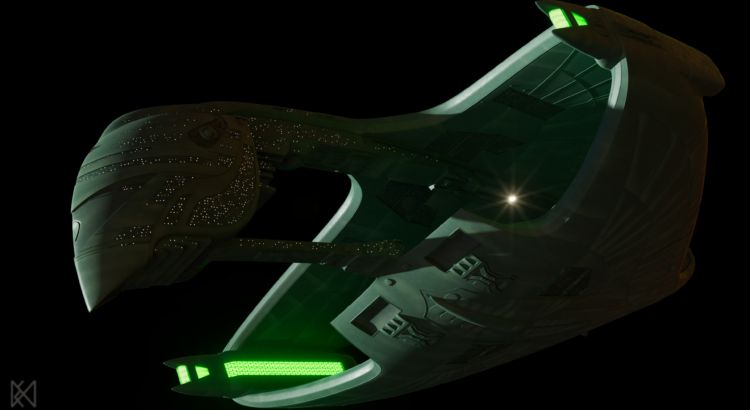 I have finally finished work on the Romulan Warbird! Check back at Part 1 to see how I left things previously, but essentially I still had all the detailing to model, and of course all the materials to sort out.

Star Trek ships aren’t known for their high levels of surface detailing, unlike Star Wars ships for example. This though is a huge ship, and there are a few areas heavy with details, and even a few greeble pits dotted around. On the original model these were filled with what look like small pieces of plastic card glued up in various arrangements – not enough for an HD model. So I knocked up a small library of greebles and basically filled the pits with what I can only described as greeble vomit!

The Romulan Warbird is huge. Did I say that already? It’s meant to be 1041.65 metres long, apparently. It’s also quite tall (about 285 metres), which means a lot of windows… so… many… windows. On the original model, the windows were done by poking tiny optical fibres through the hull. These fibres were not quite trimmed back flush to the hull either. This gave me the idea to model the windows in slightly raised frames and simply place them as needed. So no need to mess around cutting them into the hull (which would have been sheer hell).

The downside to this is that you obviously can’t fit a window box in behind the window! So this called for a different solution. Instead, I have made use of a window box OSL shader (adapted from this one, by Julius Ihle). For this, I modelled 11 different room sets, rendered them out in an equirectangular format, and then used a Nuke comp to produce the required cross format for the shader. It renders super fast, too – here’s live output from the Redshift Render View.

This looks good close up on a single window, but I found it looked bad from a distance and with so many windows involved. So I set the shader to fade out to a solid colour with distance from the camera, with the colours and intensities carefully matched to the room sets to make the blend as invisible as possible.

And that left the materials! After unwrapping the model, I sent it over to Substance Painter and set about recreating the look of the original models. The Romulan Warbird shooting miniatures are painted in a medium grey, with hints of green. However, in post processing for all shots on Star Trek The Next Generation, the ship was colour corrected to give it a very saturated green appearance. I feel they usually overdid this somewhat, so I have found a balance of the two that I liked.

The original models have a very plain paint scheme. There is a lot of shading applied around the panels and other areas, but under that there is no further painted detail. This doesn’t help sell the scale of the ship, and I think that really stands out in TNG-R. So I have added some very subtle panelling to help provide some close-up interest and sell that scale better.

And with that (and some other minor details/tweaks), she is complete! You can also see this on my ArtStation profile. Modelling, as ever, was in Cinema 4D. Textures painted in Substance Painter, and all rendering in Redshift.

There will be some animations to come in the future…